If your website or blog isn’t optimized for mobile, Google is penalizing you. You may have heard of Mobilegeddon, and it’s here. It’s happening. Mobilegeddon isn’t like when Facebook swept away all of your inactive/memorialized followers a few months ago – an event that occurred once and now we all have several (hundred/thousand/million) fewer followers than we did before but we’re all on the same playing field and moving forward with all things being equal. Mobilegeddon is virtual death for sites that aren’t optimized for mobile (and as I’ve seen with another site I manage, it’s a boost to sites that are). You can see if your site survived here.

Some folks are getting pretty bent out of shape over it. They’ve spent thousands of dollars on pristine website design and now it’s being penalized because it’s not mobile responsive.

A couple truths to accept on that front:

You have to remember that Facebook, Google, Instagram, etc. don’t just do these things because they want to make your life as a marketer more difficult (although the changes made to Gmail in recent years felt like a personal attack on me as a human being just trying to live my life – they probably weren’t). These companies have to please the people who use them. True, they make their bajillions through advertising, so you might be wondering why they would penalize the very people who put their organic, cage-free food on their reclaimed mahogany tables and gas in their self-driving cars. BUT Google knows that advertisers like you and me won’t buy ads from them if we find out our customers don’t like using their platform anymore. Would you consider buying an ad on Myspace? No. Because Myspace failed to give its users what they wanted. So, these successful companies keep everyone happy by rolling out some necessary obstacles every once in a while, and the weak get left behind.

Today – the “weak” are those sites that are not mobile friendly. And here’s why, according to comScore:

Okay – before you decide you need to create an app for you brand, first consider if an app is even right for your organization. For example, I head the marketing for a non-profit camp. We really capitalize on marketing ourselves as a way for children to “unplug” – creating an app would be very much off-brand. Similarly, trying to be on every social media platform and latch onto every digital trend can be a fatal mistake for a lot of marketers – not only could you potentially waste your time and money (i.e. AARP should not start a Periscope account since it’s likely their target audience isn’t on that channel) but doing so might hurt your image or appear forced.

However, in the digital strategy of the camp I work for, we’ve adapted our tactics to the predominant use of in-app internet browsing, and if you decide that an app isn’t right for your brand (or you just don’t have the resources to implement and manage one), you can still be app-centric by:

But most importantly, get we need our websites to be optimized for mobile! Because even if Google wasn’t penalizing mobile unfriendly sites, people just plain wouldn’t like going to our sites. So it’s simply a priority we really need to make if we want to compete.

My two cents: Not everyone agrees on this, but I recommend opting for a responsive design to your site (how to tell? when you change the size of your browser, the site adjusts to fit the screen — try it with amandahinski.com). Rather than having a developer build a “mobile site” for you, which might look/sound really fancy, a responsive design ensures that regardless of what device your site is being viewed on, users can access and operate it. 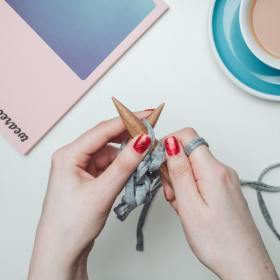